MUSEUM GETS ANOTHER GRANT TO BOOST EXPANSION 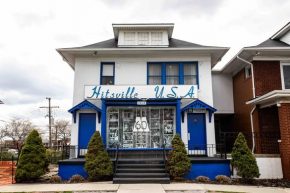 The grant from the Vera and Joseph Dresner Foundation in Michigan is the most recent since museum officials said they’d reached $25 million, or the halfway point in fundraising. The official groundbreaking for the expansion to Hitsville USA was held in September as part of Motown Records’ 60th anniversary celebrations. Officials say the expanded facility will house interactive exhibits, a performance theatre and recording studios.