Public elementary school teachers in Toronto will hold back-to-back one-day strikes next week if a deal isn’t reached with the government by then. The Elementary Teachers’ Federation announcing that all 83,000 of its members will walk off the job February 6 as part of a province-wide strike. In addition, ETFO will continue to hold rotating one-day strikes in dozens of boards, including a walkout next Friday that will include Toronto and York boards. 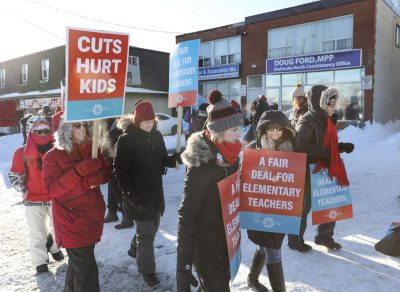 Meantime the union that represents 55,000 education workers is accusing the Ford government of not holding up its end of the bargain…months after the two sides ratified a new contract.Canadian Union of Public Employees spokesperson Laura Walton says the December deadline to re-hire laid off workers has come and gone. The union says the government agreed to restore $78 million in funding to re-hire 1,300 staff across the province but that hasn’t happened. All four major teachers’ unions are engaged in some form of job action, from work-to-rule campaigns to rotating strikes.