Hundreds showed up to a Toronto rally in support of striking  teachers. It comes on the same day elementary teachers are on a province-wide walkout as part of escalating strikes. It’s the first provinc wide strike by elementary teachers and a second is planned for February 11th. But all Toronto District School Board elementary schools will be closed again on Friday February 7th and schools will re-open to students Monday, Feburary 10th. Union president Sam Hammond has said ETFO was close to a deal with the government after three days of talks last week but add the province’s negotiators suddenly tabled new proposals the union couldn’t accept. Education Minister Stephen Lecce has said the government has put forward reasonable proposals. ETFO says it’s now targeting each board with a one-day strike each week in addition to a provincewide strike each week. 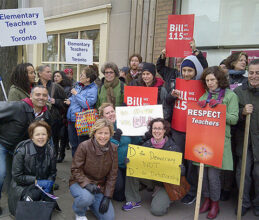