CN Rail says it will be forced to close significant parts of its Canadian network unless blockades are removed. Demonstrations have sprung up across Canada since the R-C-M-P began enforcing a court injunction last week against Indigenous chiefs who’ve been blocking construction a pipeline in B-C. Transportation Minister Marc Garneau says the blockades are illegal and hopes the situation is resolved soon. He says it’s  up to the provinces to issue injunctions to end the blockades. Via Rail commuter trains have also been impacted along the the Montreal-Ottawa-Toronto corridor. 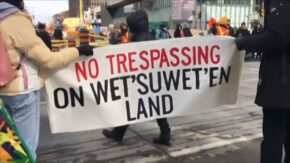 About 50 protesters protested at the Toronto office of Carolyn Bennett, Minister of Crown-Indigenous Relations. Police broke up the demonstrators, who were blocking traffic at Yonge and Eglinton.

Protesters in B.C. obstructed all the entrances to the  legislature  as politicians tried to enter on the day of the throne speech. Some say they won’t leave the grounds until the province agrees to pressure the R-C-M-P and Coastal GasLink to leave Wet’suwet’en territory in northern B-C.