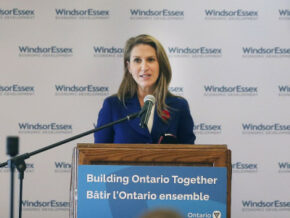 Mulroney says the new Ontario Line and the Scarborough subway extension will be given top priority.

Her announcement comes just hours after news broke that the Eglinton Cross Town LRT won’t be completed before 2022, a year behind schedule.
Last year, the PC’s unveiled a $28.5 billion plan it said will move the province’s aging public transit system into the 21st century including a new downtown relief line and a three-stop Scarborough subway extension.