ONTARIO BACKS DOWN TO RESTART TALKS WITH TEACHERS 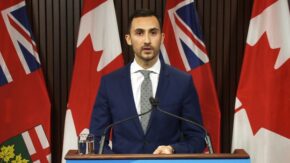 In a surprise announcement, the Ford Tories have backed down on two major issues that caused contentious bargaining with the major teacher unions. Saying “enough is enough” Education Minister Stephen Lecce says it’s time for a deal to keep students in the class where they belong by announcing his government is backing down on class sizes and mandatory E-learning. 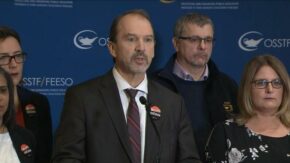 The head of the union representing Ontario high school teachers is not pleased with how the Ford government made the announcement. Harvey Bischof calls it an “amateur hour move” to publicly announced the changes amid informal talks between the two sides. The government is now offering reduced high school class size to 23, one student over last year’s level. The Ford Tories have also backed down on mandatory E-learning. Parents will be given the ability to opt-out on behalf of their children. The union representing Ontario’s English Catholic Teachers issued a statement that teachers are fed up with this government’s games and spins. The unions have been asking for two per cent bump in pay, but it’s capped at one percent. In exchange, the government is calling on the unions to cancel a planned strike on Thursday and make room for “good faith bargaining.”