$50 MILLION FUND IN THE FIGHT AGAINST COVID-19

The province has announced $50 million in funding for the new Ontario Together Fund. It’s aimed at helping companies re-tool their businesses to make things like masks, gloves, and other medical supplies for front-line workers. Premier Doug Ford says “the surge” is coming, and getting these supplies now is critical. 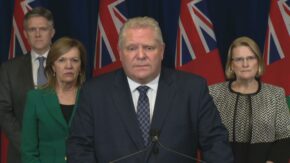 The government says the money will go to the most viable proposals that can quickly provide medical supplies and equipment, including gowns, coveralls, face shields and ventilators. The Premier calls it one of the most ambitious efforts undertaken by the province in generations. The Ford government recently ordered 10,000 ventilators while Bruce Power, Canada’s only private nuclear generator, is donating $600,000 pieces of personal protective equipment including gloves, masks and gowns for healthcare workers.This as the province records its largest single-day spike in infections, with 426 new cases and four more deaths.