The woman who played the icy temptress Pussy Galore in the James Bond film, Goldfinger has died. 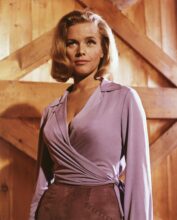 Honour Blackman was 94. She died peacefully of natural causes at her home in southeastern England. Blackman was first known as Cathy Gale in The Avengers 1960s T-V spy series. She was 39 and five years older than Sean Connery when she landed the role of Bond’s love interest, and she long maintained the term of  Bond girl  didn’t apply to her. Acting in film, television and theatre for seven decades, Blackman earned more than 100 screen credits. She is survived by two children and four grandchildren.