Charity donation bins around the city have become  illegal dumping grounds and Mayor John Tory is sending a stern warning. 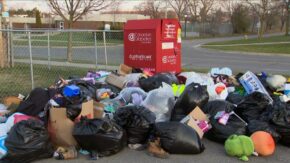 “As for those who took advantage of this situation to leave garbage beside these bins, if you’re caught doing this again, you will be charged and fined and I think it’s something that is richly deserved,” says Tory. He says the fine is $500. The various charities suspended pick up from their bins last month amid COVID-19. Tory says while he recognizes some of the items were donations from well-intentioned residents, most of it was garbage. City crews began a blitz on Tuesday to clean up the sites.