Toronto’s Mirvish theatres are set to re-open in January. The theatre company is moving the subscription season from September out of concern for the health and safety of the cast, staff and crew at its six Toronto theatres. Owner David Mirvish notes that if he gets the all clear to open sooner, Come From Away will resume performances almost immediately. 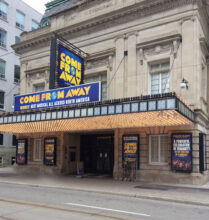 “Theatre is a collaborative art form and one that cannot exist without an audience. For the health and safety of all the artists, crew and staff working our theatres, and for that or our audience, I think it is best to begin our new season – which traditionally has always started in September – in January of the new year,” said David Mirvish.