A different tone from Toronto’s Mayor and the city’s medical officer of health who are now encouraging people to leave their homes but keep their distance. The city announced ACTIVE TO, a plan to create quiet streets making room for more pedestrians, cyclists and transit riders. 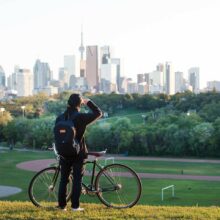 “These will be local routes with traffic calming measures implemented quickly to enable car traffic only and open up more space for cyclists and pedestrians,” says Tory. “These routes will be chosen in areas where there is a lack of park space or conversely, in an area close to large parks to help alleviate congestion in the parks.”
50 kilometres of roads will be closed to all but local traffic. More details will be released next week.