Restrictions are being lifted in seven more regions across the province this Friday, but not in Toronto, Peel and Windsor due to higher numbers of COVID-19. To regions stuck in stage 1, Premier Doug Ford says “be patient” and hints they too could enter stage two by Friday, 26th. 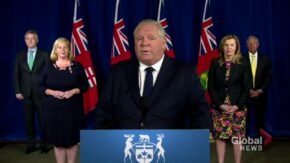 The Premier was asked repeatedly if he’s concerned about Toronto residents visiting stage two regions for hair cuts, or eating at a patio.

“Be vigilant, don’t let your guard down, we aren’t out of this by any means,” said Ford. “Practice social distancing even when you’re in a group, you have to keep a distance and wear a face covering.”

The Ford government says testing levels are at historic levels with 1 million completed to date. The total of 181 new cases is the lowest number of new daily cases since late March.