UNITED NATIONS SAY "NO" TO CANADA

The Trudeau government has lost its bid for a seat on the United Nations Security Council. 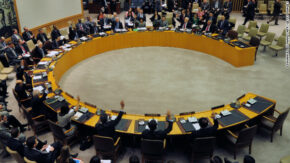 Some joked on twitter that Canada won the bronze, but in this case, it means last place. The two temporary seats went to Norway and Ireland on the first ballot. Canada fell 20 votes shy with 108, Norway received 130 and Ireland got 128. Canada’s loss came in a secret ballot of 192 member states of the United Nations General Assembly.Norway and Ireland both spend more on international aid and contributions to U-N peacekeeping missions, two criteria that were widely seen as essential in winning a seat on the council. David Carment with the Norman Paterson School of International Affairs had told Zoomer Radio’s Fight Back with Libby Znaimer Trudeau’s brand had a lot riding on this. Jonathan Berkshire-Miller of the Macdonald-Laurier Institute told Fight Back there haven’t been many foreign policy victories for this government and not getting the UN security council seat will be “quite damning”.