Start booking your hair appointments for Wednesday in Toronto and Peel. That’s when both regions are allowed to enter stage two of the reopening along with most of province with the exception of Windsor Essex, that will remain locked in stage one until the number of COVID-19 cases among migrant farm workers comes down. 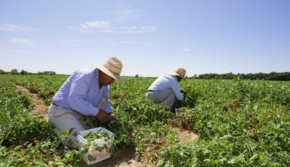 “I love the farmers, but guys, you gotta help us here,” Ford told reporters at his daily briefing. “I’m just going to tell it the way it is, farmers just aren’t cooperating, they aren’t sending out the people to get tested and we got to bang our heads off the wall and figure out why?”

Ford says he may be forced to use measures to ensure testing is done. The province says it’ll work with Ottawa to conduct joint inspections of farms and the living conditions of migrant workers. Hundreds of migrant workers have tested positive for COVID-19 and three have died.

While the Ford government says it will have more to say about stage three soon, Health Minister Christine Elliott says it depends on a number of things.

“The number of new cases, the ability to manage things from a health perspective, hospital occupancy as well as the public health resources in each area to make sure they are able to deal with any potential up takes in cases,” said Elliott.