TORONTO COP GUILTY, BROTHER NOT GUILTY IN THE BEATING OF DAFONTE MILLER

An Ontario judge has found a Toronto police officer guilty of assault in an attack on a young Black man in December of 2016. 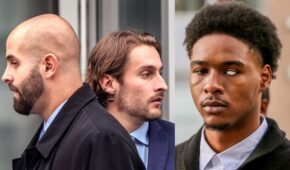 But while Constable Michael Theriault was convicted, his brother Christian was acquitted of the assault charge and a charge of obstruction of justice. The brothers were accused of chasing then 19-year-old Dafonte Miller and beating him so badly with a pipe that his left eye burst. Defence lawyers argued the brothers caught Miller and his friends breaking into a vehicle and acted out of self-defence, alleging Miller was the one wielding a pipe. The judge delivered the verdict live online to thousands watching, as the COVID-19 pandemic impacts court proceedings.

Shortly before the verdict was announced, Premier Doug Ford says while he can’t comment specifically on this case, he says much more needs to be done to end systemic racism.
“There’s so much out there in communities right now and I’ve heard from so many people over the past few weeks, and there’s so much work to be done and I’m committed to do that work to end systemic racism in this province,” said Ford.