Kingsville and Leamington move to stage two of the re opening Tuesday, joining the rest of the province. Premier Doug Ford says COVID-19 outbreaks on local farms are under control and community spread of the virus is low. The Premier says he’s heading there soon, for a much needed hair cut. 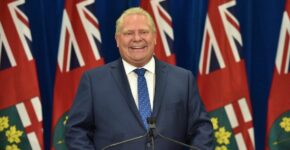 “I’m coming down to pay you folks a visit, I’m in desperate need of a haircut so let’s pick a barber somewhere in Leamington or Kingsville and I just can’t wait to go down and thank the people personally,” said Ford.

“Well that information is being reviewed right now,” said Elliott. “I can’t name a specific date I can tell you the team is actively looking at the data and looking to move into stage three as soon as we possibly can”

Under stage three, the Premier has said everything will open except large sporting events and concerts.

Meantime the Ford PC’s want to fast-track construction of thousands of homes, some affordable housing, at new transit stations and will introduce legislation Tuesday.Transportation Minister Caroline Mulroney says the sweeping changes could create tens of thousands of new jobs and increase transit ridership.