The young woman who was videotaped tossing a chair from a Toronto condo balcony is not going to jail. 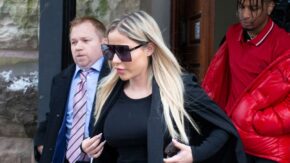 20-year-old Marcella Zoia has been fined $2,000 and will have to serve 150 community-service hours and be on probation for two years.

Her lawyer, Gregory Leslie says his client has suffered enough.

“It’s a very fair sentence, and what I said before is absolutely correct,” Leslie told reporters outside the courthouse.

“Ms. Zoia now has an adult conviction, she now has a criminal record and she has to deal with that so for anybody to suggest there’s no consequence, is absolutely wrong.”

Zoia had pleaded guilty to mischief endangering life in the February 2019 incident. The video of the incident went viral on social media.