BOYS OF SUMMER TO PLAY IN BUFFALO

The Toronto Blue Jays have a new temporary home. 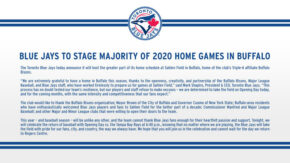 The team will play most of their home games at Sahlen Field, the home of their minor-league affiliate in Buffalo.

The announcement came just hours before their season opener in Tampa Bay Friday night. Toronto’s first game in Buffalo will either be July 31 against Philadelphia or Aug. 11 against Miami.

Canada’s lone Major League Baseball team was forced to find a new home after the federal government last week rejected the club’s proposal for the Blue Jays and visiting teams to stay in the hotel inside Rogers Centre and never leave the facility during stints in Toronto.