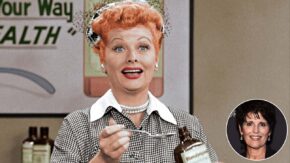 The festival in the comedy legend’s hometown of Jamestown, New York, will stream conversations with artists over three weekends, starting Friday.

The 29th annual event will pay tribute to Carl Reiner, t creator of The Dick Van Dyke Show who died in June at the age of 98.

The non-profit National Comedy Centre was founded in Ball’s hometown, which the “I Love Lucy” star had envisioned as a destination for comedy The festival drew crowds last year but is among many events forced to improvise due to the pandemic.