Premier Doug Ford took a swipe at teachers unions today, asking they be more flexible. “Why is it that the teachers’ unions, they constantly want to attack,” said Ford. 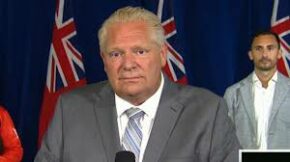 His comments come as his government rejects a plan by the Toronto District School Board that calls for a shorter school day and smaller class sizes. The government says the proposal doesn’t give students enough time in the classroom.

Ford even accused the unions of telling their members not to spend one extra minute in the classroom.

Education Minister Stephen Lecce says the ministry had a positive meeting with the TDSB Monday to talk about issues like teacher prep time, distancing and smaller class size.