Six weeks after Broadway star Nick Cordero passed away from COVID-19, a GoFundMe page for the family of the Hamilton born actor has passed 1 million dollars and climbing. 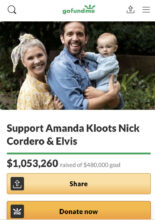 The 41-year-old Tony Award-nominated singer, actor and dancer was already well-known among Broadway and musical theatre fans when he entered Hospital in Los Angeles in April with the virus.

His name has not faded from public discussion since he died July 5. A petition to have a New York theatre named after him now has over 34 thousand signatures.

And a live concert album recorded when he performed in New York a year before he got sick will be released on September 17th, his birthday.