SCHOOL BOARDS MAY NEED TO SPLIT OR 'COLLAPSE' CLASSES

School boards will have no choice but to combine and collapse some classrooms this year. That warning from Ontario’s Trustees Association. Spokesperson Cathy Abraham says the moves comes despite fewer children in schools as some parents opt for online learning. She says boards can’t opt to maintain lower class sizes because they must follow funding agreements with the province. 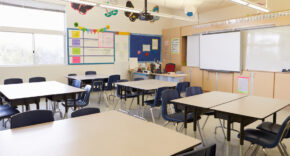 Education Minister Stephen Lecce says ‘time-tabling’ is nothing new. “Because we want to make sure we are ready for September,” said Lecce.

Doug Ford has said he wasn`t aware of boards collapsing or splitting classes, but acknowledged it could be happening.

Meantime, Health Minister Christine Elliott says it’s impossible to reduce the risk of COVID-19 to zero but there’s an outbreak team in place to move in if outbreaks happen.

“To make sure they are ready to go if a student, a teacher, staff member contracts COVID-19, we will be there to deal with it immediately,” said Elliott.

The Toronto District School Board has already said it can’t guarantee two metres of distance despite spending $30 million of its reserves and millions in provincial funding to hire over 300 new teachers to reduce class size.