A strong endorsement for Ontario’s Chief Medical Officer of Health from Premier Doug Ford who is rejecting calls by the Registered Nurses Association for Dr. David Williams to resign. 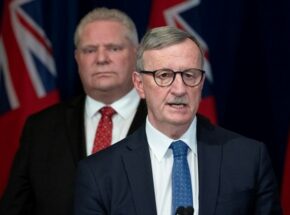 “They’ve been calling for Dr. Williams head since the beginning and I take personal offence for that,” said Ford.

“Dr. Williams has worked around the clock, this man doesn’t sleep, he’s out there protecting the people and the numbers speak for themselves.”

RNAO Chief Executive Officer Doris Grinspun says Williams is not fit to lead the province’s response to the pandemic, describing his guidance on the opening of schools as wishy-washy.

University of Toronto epidemiologist Dr. David Fisman has also called for Williams to resign tweeting that it’s “long past time.”