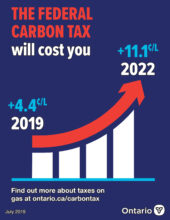 The ruling says the labels are an unconstitutional attempt to legislate private retailers to ‘stick it to’ another tier of government.

In the Friday ruling, Justice Edward M. Morgan wrote that gas stations are at liberty to keep the anti-carbon tax stickers on their fuel pumps or remove them as they see fit.

The province brought in the stickers last year after Ottawa imposed a carbon tax in Ontario and three other provinces.

There’s been no response from the government.

But the NDP’s Energy and Climate Crisis critic Peter Tabuns released a statement that reads in part. “The Official Opposition NDP is calling for an immediate commitment from Doug Ford that he will not waste another dollar of public money to appeal the Superior Court decision”