A second staff member with the Peel District School Board has tested positive for COVID-19. A concerned Doug Ford says he’s been trying to contact Brampton Mayor Patrick Brown about the rising number of new cases in Peel.

“I gave the mayor three phone calls this morning and by the way it’s no offence, Patrick’s doing a great job, but I couldn’t leave a voicemail but Patrick, if you’re listening, I need to talk to you, find out what’ happening up in Peel,” Ford told reporters.

Meantime, the Toronto District School Board has released data that shows families most in need of social interaction are keeping their children home from school. But the Premier is telling kids to avoid fear mongering on TV. 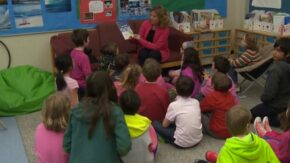 “For that, I apologize to the kids, but I can assure you as Premier, I will do everything in my absolute power to protect our kids and our children and our students,” said Ford.

Doug Ford’s government and the health team at SickKids have stressed that in class learning is vital for kids’ mental and physical well being.