As Ontario records over 300 new cases of COVID-19, Premier Doug Ford says it feels like the  perfect storm  is coming with schools returning and flu season upon us.

“And today’s numbers are a cause for concern for all of us,” Ford told reporters.

Both Ford and Health Minister Christine Elliott say a second wave is coming. 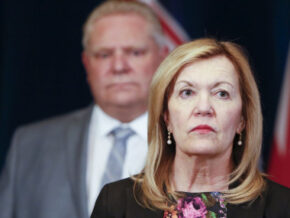 “Wave two is coming and the most important thing that we all need to continue to do, all 14.5 million of us, is to please continue to follow the public health guidance, said Elliott.

Ford says every option is on the table including more shutdowns on a regional basis and adds his government is about to reveal a robust preparedness plan they’ve been developing all summer that includes expanding health care to more PPE.

He says most new cases are coming from social gatherings because a small percentage of people are getting lax.

Elliott says it will be more complicated and difficult than the first wave because of flu season.

The Ford government is looking to expanding testing capacity, and wants to work with private testing facilities.