Premier Ford calls the latest COVID-19 modelling projections “troubling” with 1,000 new cases possible per day by mid-October with infections doubling every ten days.
But he touts the government’s $2.8B   dollar fall preparedness plan to deal with the second wave of COVID-19.
And despite calls for more restrictions from the Ontario Hospital Association for short-term non-essential closures in hotspot regions, Ford says for now, that’s off the table.
“We aren’t rolling back today, I’m not saying it’s never going to happen but today that’s not a conversation that’s going to happen in cabinet, we’re going to take the advice from Dr. Williams and the team like we always have,” said Ford. 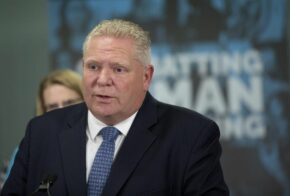 The province’s top doctor David Williams says they could decide to after targeted areas but schools will remain open.
Meantime, the minister of long term care has clarified that outdoor visits are still allowed at care homes.New rules restrict indoor visits to two designated caregivers.