PSW'S GET TEMPORARY PAY BUMP DURING SECOND WAVE OF COVID-19 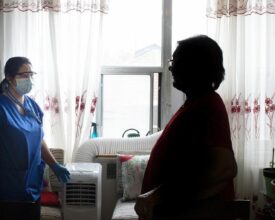 The Ford government is spending $461M to give PSW’s in nursing homes and home care a $3 dollar per hour raise and those working in hospitals will get $2 dollars more an hour. That’s less than the 44 dollar hourly pandemic pay they had until mid-August.

The NDP and Green parties have been calling for the pay hikes to be permanent but Premier Doug Ford wouldn’t commit.

“We have a few T’s to cross, I’s to dot and everyone knows the work they’ve been doing, I’ve always said they’re overworked, underpaid but folks, stay tuned, we’re going to help you moving forward,” Ford told reporters.

In announcing pay raises, Doug Ford choked up when talking about the PSW who cared for his mother Diane, who died from cancer in January.

The pay raises end next March.