With continued confusion about social gathering rules, Premier Doug Ford and other provincial officials tried to clear the air during their daily pandemic briefing. Ford says Thanksgiving weekend will be “make it or break it” and he won’t have more than 10 attend his Thanksgiving.
“I have a big family, I told [my wife] Karla and she knows, we have no more than 10 and simple as that and that’s what we’re going to obey by as well,” said Ford initially.
But Ontario Associate Medical Officer of Health Dr. Barbara Yaffe would like it less than ten.
“Yes, ten is the max for indoors but that doesn’t mean you should go to ten, we are hoping people will stay with their households,” said Dr. Yaffe.
It’s wasn’t clear if the Premier is confusing immediate family with household but when pressed on his weekend plans, the Premier told reporters “I’ll get back to you.” 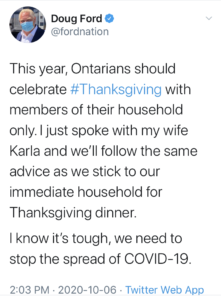 Within the  hour, he tweeted clarification saying he’s now spoken with his wife Karla and they’ll follow the same advice and stick to immediate household only for Thanksgiving dinner.
Meantime, Dr. Yaffe’s advice seems to be at odds with Toronto’s Medical Officer of Health, Dr. Eileen DeVilla who says the safest option for people who live alone is to visit family virtually for Thanksgiving.
Dr. Yaffe told reporters her son, who lives alone, will join her household for Thanksgiving dinner.