The cast of the Broadway hit Hamilton including creator and star Lin-Manuel Miranda., will re-unite for a Joe Biden fundraiser this Friday. 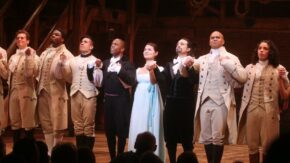 The virtual event will include a Q&A and a special performance. Hamilton made its Broadway debut in 2015 and played briefly in Toronto before being shuttered by the pandemic.
Another Broadway show Jagged Little Pill presents a Biden fundraiser of their own Tuesday October 13, featuring cast members of the musical and Canadian singer-songwriter Alanis Morissette.
And the following day, Wednesday October 14, the cast of the popular show The West Wing is reuniting for a virtual trivia night to raise money for the Biden Victory Fund.