ALL BUT 2 TORONTO COUNCILLORS WERE NO SHOWS AT MAYOR FORD'S STAFF CHRISTMAS PARTY; NEW POLL SAYS HE WILL LOSE 2014 VOTE 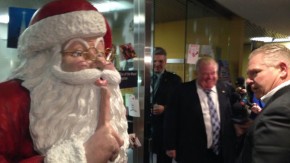 Other than Rob Ford’s brother, only two Toronto city councillors attended the mayor’s Christmas party at his mother’s house in Etobicoke last night.  Toronto’s embattled mayor extended a last minute invitation for all of the Toronto city councillors to come to the event.  Doug Ford admits, “even if we’d given a months notice only a handful would’ve shown up.  But we’re not here to represent the councillors, we’re here to represent the people.  That’s why we’re in the job.  And that’s why we work as close as we can with councillors.  It gets very political down there at times.  But we want to move forward with the agenda that the people elected us, not what the councillors think that people want.”

Councillor Joe Mihevc says he just couldn’t bring himself to attend Rob Ford’s Christmas party.  “This is just too much, after all he has said, all he has done, the shame that he’s brought on our city, the shame that he’s brought to city council, I feel that the appropriate response is just to distance myself from it, stay away from it as much as possible.”  But Councillor Frank Di Giorgio did come out for the Mayor’s Christmas party.  “Although I was busy preparing for tomorrow’s meetings, I said I would try to come out,” Di Giorgio explained as he was leaving the party, “When I got in there, we sang happy birthday to Renata, the mayor’s wife, and started wishing people a Merry Christmas.”

Mayor Rob Ford continues to insist he will run for re-election next October and will win.  But a new poll suggests otherwise.  Forum Research found in a race between the three declared candidates of Ford, Karen Stintz and David Soknacki, the incumbent mayor would be in a statistical tie with Karen Stintz.  Ford would get 36 percent support while Stintz would get 35 percent, 18 percent would be undecided and Soknacki would have around 11 percent.  But if Olivia Chow and John Tory decide to run for Toronto’s mayor as is expected, Chow would be elected with 32 percent voter support, Tory would be at 27 percent, Ford at 25 percent, Stintz at 7 percent and Soknacki at 4 percent.