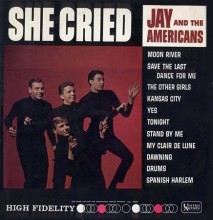 The original lead singer for Jay and the Americans has died in Tampa, Florida. Jay Traynor was 70.  Traynor was best known for singing lead on Jay and the Americans’ first hit, “She Cried,” which was a top five hit in 1962. He started his first musical group, The Ab-tones, while in his mid-teens.  At the age of 17, Jay was asked to become the new lead singer of The Mystics, before starting with Jay and the Americans.  Traynor didn’t last long though.  After missing a few rehearsals, the other members of the group asked if he wanted to go solo.  Jay released a couple of albums during the 1960s which were not successful.  He went on to work behind the scenes in the 1970s and then later in his career, Traynor performed with cover bands and eventually became the lead singer of a band where he developed an act featuring Frank Sinatra music.  Jay Traynor had been fighting liver cancer for the past two years.