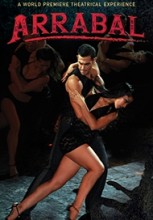 An award winning creative team is bringing the heat of tango to Toronto.  Arrabal opens Tuesday with an explosive story told entirely through  dance and the music of multiple Academy Award winner Gustavo Santaolalla who tells Zoomer Media tango is in his blood.  “I grew up listening to my Dad singing tangos every morning while he shaved.  I listened to tango at family reunions, on public transportation and radio and TV.”

62 year old Santaolalla says “I wanted to tell a real story that had to do with Argentina, the story of a coming of age of a girl.  Her father was a great tango dancer who also was a political activist.  He’s apprehended by a military government and he’s tortured and he eventually disappeared.  It’s the story of Arrabal eighteen years later, who somehow wants to know what happened to her father.”

The world premiere of Arrabal is directed by Toronto raised Sergio Trujillo of Jersey Boys fame and features a live band and performers direct from Buenos Aires.  There are also free tango lessons and cabaret seating where it’s staged at the Panasonic Theatre.  There’s more information by clicking here.