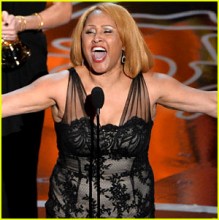 There was an impromptu moment of song on last night’s Oscars which some say, stole the show.  72 year old Darlene Love received a standing ovation as she belted out a special thank you when accepting the award for 20 Feet from Stardom which won best documentary feature.  You can see it here.

Darlene Love was an iconic voice of the 1960s on The Crystals’ hits He’s a Rebel and He’s Sure the Boy I Love  and tracks such as Today I Met the Boy I’m Gonna Marry and Christmas (Baby Please Come Home).  Love has been riding a wave of fame for the last year since the documentary exposed the famous backup singer’s rich career.  She also made an appearance on AM 740’s Happy Gang Show in December.