A new movie on the life of Ernest Hemmingway is making history while re-telling history. 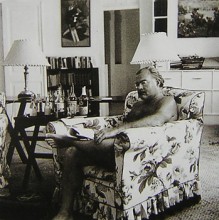 Papa tells the story of a hero-worship by a young reporter for the legendary author that turns into a friendship during the Cuban revolution.

The movie is a joint US-Canadian-Cuban production. It was able to get around the US embargo on Cuba because it’s based on an autobiography and qualifies as a documentary.