A lot appears to be at stake for the three main party leaders, as they face off in the televised Ontario election debate tonight. 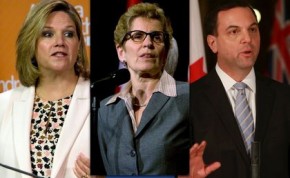 A new Ipsos Reid poll suggests that 38 percent of Ontario voters will make a decision on who to vote for after the debate is held.  Liberal Premier Kathleen Wynne says she understands why this is the case.  “There are a lot of people who wait for the debate to actually tune into an election campaign,” Wynne explained yesterday during a campaign event in Toronto, “so a lot of them because of the busyness of their lives, they haven’t necessarily gotten all of the issues and they’ll be looking for some clarity.”  Wynne admits there is pressure during the debate because “there’s such a stark choice between what P.C. Leader Tim Hudak is proposing for the province and what the Liberals are proposing.”

Hudak says he won’t be performing tonight, but instead will simply offer the best solutions for the province.  “They’ll see somebody in me standing up there and being honest, being direct, and being crystal clear about where he stands; less waste, more jobs in the private sector, lower taxes, more affordable energy.  Nothing exciting, not a great actor, and straight up.”

Green Party Leader Mike Schreiner was not invited to participate in the debate because his party holds no seats in the legislature.