Neil Patrick Harris is taking his Tony and going home. 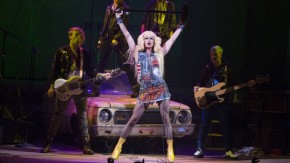 The frequent host of the Tony Awards is leaving the hit Broadway show Hedwig and the Angry Inch on August 17th after winning a Tony award last Sunday for his blistering performance as a transsexual rock singer.

Andrew Rannells will don the wigs and tights in Harris’s place. Rannells earned a Tony nomination as a Mormon missionary in the original Broadway cast of The Book of Mormon.