Return to Grace is getting rave reviews for Steve Michaels’ stellar performance as Elvis! 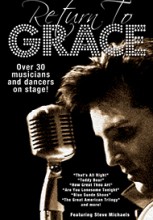 The show is on a limited run at Toronto’s Ed Mirvish Theatre until Sunday July 20th, but Return to Grace writer Rob Asselstine told The New AM 740’s Happy Gang, it’s about to go international.  “There are some conversations about various cities in the United States – New York, Chicago and Las Vegas,” Asselstine explains, “there’s also a gentleman who’s speaking with us about China and the Philippines.”

Return to Grace takes the audience from the early days of Elvis Presley’s career in the 50s to the historical Aloha in Hawaii concert in 1973.

For more information on Return to Grace, click here