The home of the New York Philharmonic at Lincoln Centre is getting a new name. 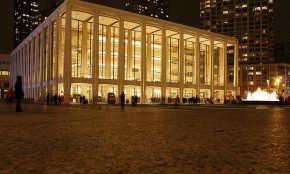 But no one knows what that name will be; or how much the naming rights will be worth.

The change comes after the Philharmonic reached an agreement with the family of Avery Fisher. His name has adorned the concert hall since he made a 10.5-million-dollar donation in 1973.

The hall is in need of renovations that are estimated to cost half a billion dollars. The Philharmonic felt that a large portion of that money could be raised by offering naming rights.

The Fisher family agreed, and will receive 15-million dollars in compensation, and a guarantee that Avery Fisher’s name will still be honoured.

How much could the naming rights be worth now? Oil-and-gas billionaire David H. Koch found his name on the nearby New York State Theatre six years ago after a donation of 100-million dollars.