Taking a cholesterol-lowering drug for five years in middle age just might lower heart and death risks for decades afterward.  And new research suggests the benefits seem to grow over time and may last for life. 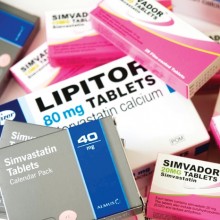 The news comes from 20-year follow-up of a study in Scotland that was the first to show that taking a statin helped prevent heart attacks and deaths in people who had not yet developed clogged arteries.

Half of the men in the study took the statin for five years and the rest took a placebo.

A similar portion of both groups took statins after the study ended.

Heart attacks and deaths remain far fewer among those who started on them at the outset.

The study was discussed this week at an American Heart Association conference.