It’s one of the most famous illustrations in all of the stories of Winnie the Pooh. 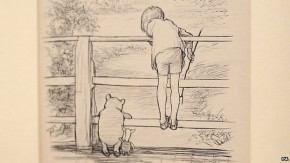 And it sold at auction for more than half a million dollars.

The ink drawing by E. H. Shepard is titled “For a long time, they looked at the river beneath them.” It’s from A. A. Milne’s second book, The House at Pooh Corner, published in 1928

It was sold as part of an auction of children’s books at Sotheby’s in London. The final price of about $565,000 was three times the pre-sale estimate.

E.H. Shepard collaborated with A.A. Milne on four Pooh books. He also illustrated Kenneth Grahame’s The Wind in the Willows. He was made an Officer of the British Empire in 1972 in recognition of his work.