The people of Montreal will say goodbye to a legend today.

A funeral for former Montreal Canadiens captain Jean Beliveau will be held at the Mary Queen of the World Cathedral beginning  at 2 o’clock.  The iconic Hockey Hall of Famer died last week at the age of 83. 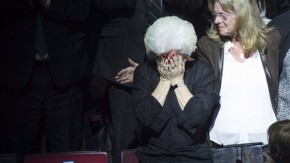 Last night, there was a moving 15-minute tribute to Beliveau at the Bell Centre before the start of the game between the Canadians and Vancouver Canucks.  As the crowd stood and cheered for several minutes, Beliveau’s widow, Elise, wept and reached her arms out in thanks to the fans.