She was just 9 years old when she was among the prisoners liberated at Auschwitz.  Now, 70 years later, Miriam Friedman Ziegler of Thornhill is going back .  In 1945, Miriam is shown in a picture taken by a Russian army photographer at the fences of Auschwitz; her arm held out, tattooed with the number assigned to her. 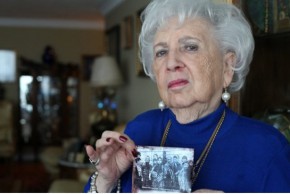 She has decided to return for a new picture, showing her as a survivor, during the commemoration of the 70th anniversary of the camp’s liberation on January 27th.  Miriam’s daughter will be going with her.  Adrienne Shulman says her mother really is “the epitome of heroism and what a survivor is” having made a life for herself and her family and teaching her children “forgiveness, acceptance and tolerance.”  She says her mom “never showed her children resentment and bitterness.”  It was always about “living life to the fullest.”

Miriam says she worries the journey back to Auschwitz will be painful, but she says it’s important.  Of the 12 children in the 1945 photo, 10 have been located alive.  Some are not well enough to make the trip, but she says five of them will meet at Auschwitz on the anniversary, where a new photo will be taken.

According to the World Jewish Congress, an estimated 1.1 million people, most of them Jews, were killed in Auschwitz from 1941 to 1945.