HAPPY 89th BIRTHDAY TO THE QUEEN!

Today is the Queen’s 89th birthday!

Elizabeth Alexandra Mary was born on April 21st, 1926 and became Queen and head of the Commonwealth in February of 1952, after the death of her father, King George the 6th. Her coronation was in June of 1952. 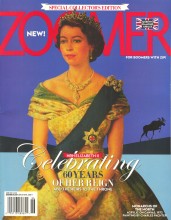 The Queen is expecting news anytime now of another great grandchild, the second child for her grandson Prince William and his wife Kate, The Duchess of Cambridge.