The Hollywood actress and director appealed for unity and accountability for some 4 million Syrian refugees. 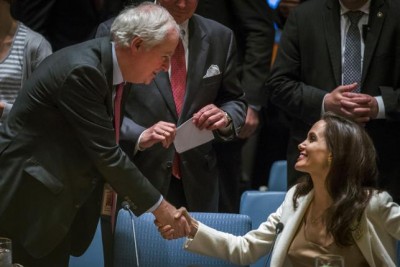 The Academy Award winner has made 11 visits to Syrian refugees in Turkey, Iraq, Jordan, Lebanon and Malta.

Jolie told the 15-member council “those refugees cannot come to this council, so please, will you go to them?”

The council failed last year to refer Syria’s war to the International Criminal Court for possible prosecution of war crimes and crimes against humanity. Syrian ally Russia, backed by China, vetoed the move.

The United Nations says about 440,000 people are besieged in Syria’s civil war – now in its fifth year.

The U.N.  aid chief, Valerie Amos, has appealed to the council to mandate the Commission of Inquiry on Syria to investigate beseiged areas, the militarization of schools and hospitals, and attacks on those facilities.