'WE SHALL OVERCOME' FOLKLORIST DEAD AT 87 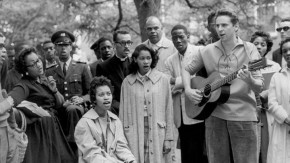 The man whose rendition of “We Shall Overcome” became an anthem of the U.S. civil rights movement, has died at the age of 87.  Guy Carawan was a white folk musician who popularized the song by teaching it to a group of black activist students in 1960. It was taken up as a rally cry and was sung at the 1965 march from Selma to Montgomery led by Martin Luther King.   It has since been performed by Tienanmen Square protesters and at the dismantled Berlin Wall.  Carawan was born in California in 1927 and moved to New York City where he became active in the folk revival movement in Greenwich Village.  Carawan had dementia and died at his home in Tennessee over the weekend.