A crude on-camera confrontation between Toronto soccer fans and a local television reporter has cost a Sunshine List employee his job.

The incident took place at Sunday’s Toronto FC game when Shauna Hunt was trying to do a report.

Fans started jumping into frame and mimicked the crude profanity-laced phrase, “F*** her right in the p****”,  seen in similar situations across North America.

Hunt had had enough of it.  See her exchange with the rude group of fans here. 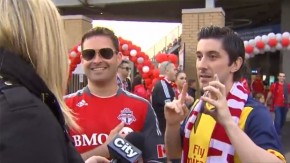 The guy who was defending his behaviour (pictured above with the scarf around his neck) has been identified by a Hydro One spokesperson as Shawn Simoes, an assistant network management engineer who made more than $106,000 last year.  He has been fired, while Maple Leafs Sports and Entertainment is taking steps to have the fans involved banned for at least a year.

But should Simoes have lost his job?  Dale Goldhawk will delve into that part of the story after 11am news on The New AM 740’s Goldhawk Fights Back.