After reviewing its security video of the verbal attack on a TV reporter outside B-MO Field on Mother’s Day, Maple Leaf Sports and Entertainment has decided to ban two men from its facilities for at least one year.

Meanwhile, a man, fired by Hydro One Tuesday for his part in the incident, is going to have a tough time finding another job unless he changes his name. 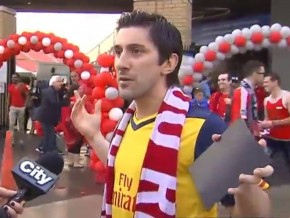 So says employment lawyer Howard Levitt, who tells the New AM 740’s Goldhawk Fights Back, it’s about the only way Shawn Simoes has a chance of landing a new one.

”If I were him I would change my name, ’cause every employer these days googles people before hiring them.  He’s unemployable if he doesn’t change his name.”

“What happened to this young man, losing his job and maybe others that will too, will send a signal this kind of conduct, this kind of language, this kind of abusive language, is not to be tolerated in a society like ours.”

The mayor adds there must be consequences for such behaviour.