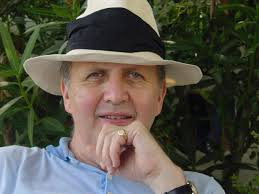 As part of the prize, awarded at the Hay Festival, a Gloucestershire Old Spot pig will be named after the winning title.