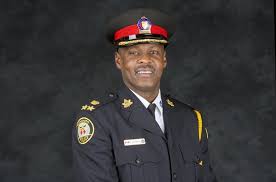 Toronto officially gets its 13th police chief today with the swearing in of Mark Saunders.  The 32 year veteran of the force replaces Bill Blair who is retiring after ten years in the Chief’s office and a policing career of more than 30-years.   The change of command ceremony at police headquarters will be attended by Mayor John Tory and other dignitaries.  Saunders, his family and other invited guests including Blair and Tory will be piped in by a ceremonial guard before the new chief takes the oath of office.